The Surprising Link Between Thyroid and Anxiety 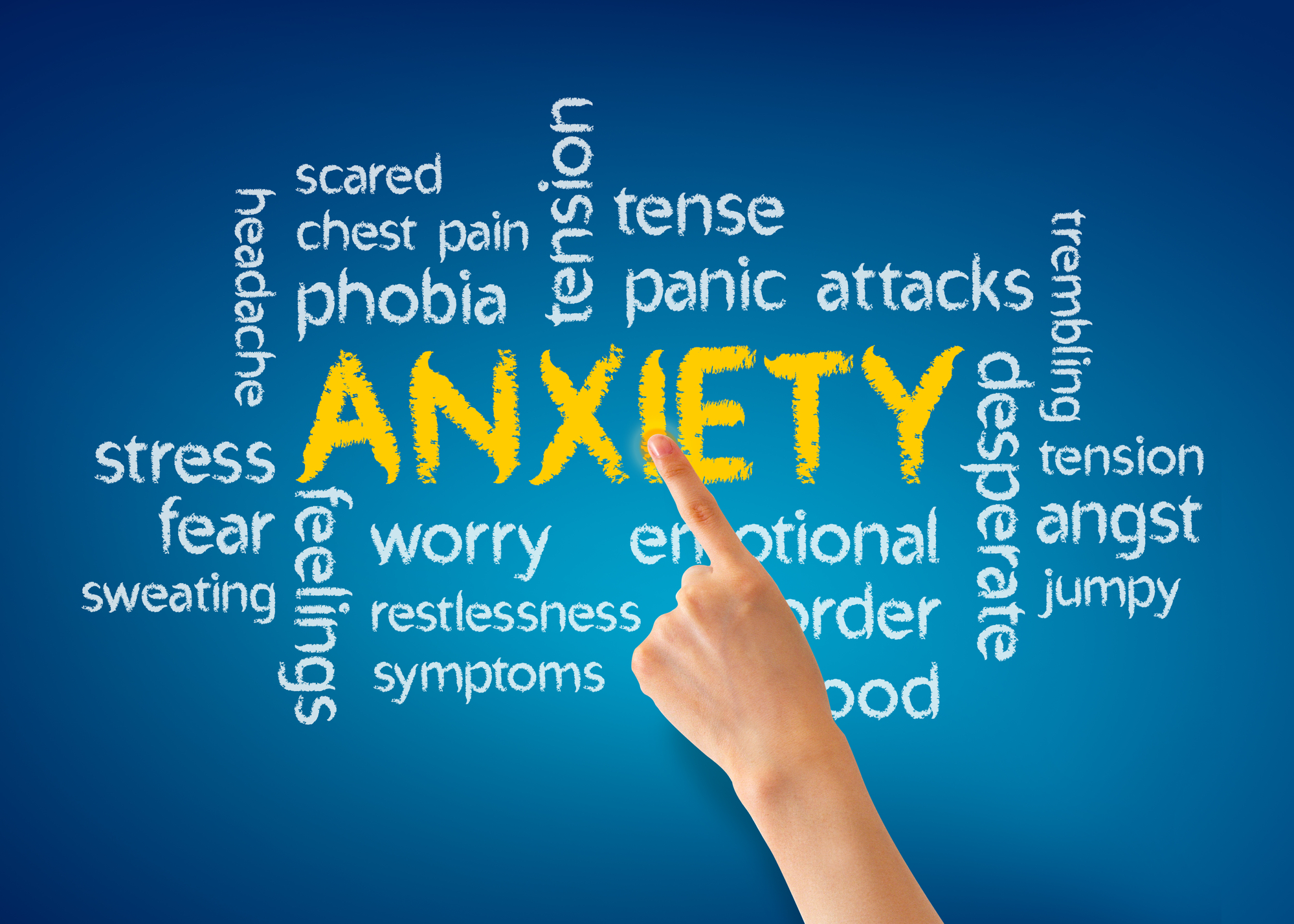 Anxiety disorders—whether generalized anxiety, panic disorder, social anxiety, agoraphobia, separation anxiety, or other variants—affect 40 million adults in the United States.[1] And yet the majority of sufferers bear their daily anxiety without help. Less than 40% of people struggling with anxiety get treatment.[2]

Even if individuals do seek help, their healthcare providers may miss underlying causes. One overlooked contributor is thyroid imbalance, and that includes both overactive and underactive thyroid metabolism.[3],[4] An estimated 20 million Americans have some form of thyroid disease. Unfortunately, it’s often missed, as nearly 60 percent of those with thyroid disease are unaware they have a problem. And women are much more affected—they’re up to eight times more likely than men to have thyroid problems.[5] And in many cases, subtle underlying dysfunction may be missed.

Additionally, deficiencies in nutrients required for thyroid function have been linked with anxiety, even when thyroid hormone levels are normal. These nutrients include essential micronutrients such as selenium and iodine, which are critical to proper thyroid metabolism.[6]

The thyroid gland is a small butterfly-shaped gland in the neck that regulates energy production and metabolism throughout the entire body. Your heart, brain, skin, gut, and even your body temperature are regulated by your thyroid.

Your thyroid gland produces two main hormones, triiodothyronine (T3) and levothyroxine (T4). About 20% of the hormones are T3 and 80% T4. T3 is the active form of thyroid hormone, and T4 becomes active when it’s converted into T3 in cells throughout the body. A third hormone, TSH, is called a thyroid hormone, but it’s actually produced in the anterior pituitary in the brain. TSH travels to the thyroid gland where it signals to the gland to produce more hormones (T3 and T4).

There are lots of reasons to test your thyroid, but when most people get it tested, doctors usually only test TSH. However, to get a more comprehensive picture of what’s going on, it’s important to also test T3 and T4.

Too much (hyperthyroid) or too little (hypothyroid) of the thyroid hormones (TSH, T3 and T4) can have a major impact on your health, including mood changes and the ability to remain calm and centered. But even when blood levels of T3 and T4 are normal, which is called euthyroid, there could still be problems. Even when T3 and T4 are normal, if TSH is normal, there’s still an up to 50% increased risk for fractures.[7]

Nervousness, a racing heart, palpitations, and sweating are common in both hyperthyroidism and anxiety. In fact, it has long been acknowledged that hyperthyroid disease is correlated with anxiety. A 2017 meta-analysis looked at 20 different studies examining the connection and found a significant overlap between the two conditions.[8]

More recently, a connection between hypothyroid and anxiety has been discovered. This may sound counterintuitive—doesn’t low thyroid mean your metabolism is slowed down and isn’t it linked with weight gain, cold hands and feet, and fatigue?[9] It turns out that thyroid imbalance, whether high or low, can give rise to both depression and anxiety.[10]

A 2005 study found that low thyroid hormone levels led to both anxiety and depression compared to normal thyroid levels. This was a small study of 23 individuals whose thyroids were removed for medical reasons, which led to temporary hypothyroidism.[11] A 2015 German study analyzed data from 2142 individuals. It found that diagnosed hypothyroidism that was not treated was associated with both depression and anxiety.[12]

But what about normal levels of thyroid hormone? Those can be implicated too. For instance, even after hypothyroid patients are treated, and become euthyroid, they can still experience depression and anxiety. In one study, 76 volunteers who were being treated for hypothyroidism and had achieved euthyroid status were examined, along with 22 healthy volunteers who had no thyroid issues. The treated patients were still predisposed to anxiety and depression.[13]

Selenium is an essential trace nutrient. In the United States, selenium content in the soil (and thus plants grown in the soil) is lowest in the Pacific Northwest, Northeast/South Atlantic seaboard, Southeast, Montana, Arizona, New Mexico, and areas of the Midwest next to the Great Lakes.[14],[15]

Because low levels of selenium have been associated with anxiety this is an important nutrient to consider. One double-blind cross-over design study looked at fifty individuals receiving either 100 mcg of selenium or a placebo each day. After five weeks of selenium therapy, anxiety, depression, and fatigue decreased.[16] Another study looked at selenium levels in 102 patients seen at an outpatient clinic in 2018. All the patients had healthy thyroid hormone levels but suffered from the slow growth of soft nodules—called a nodular goiter. In patients with low selenium levels, measures of anxiety and depression were significantly higher.[17]

The thyroid gland concentrates high amounts of selenium, and selenium deficiency has been implicated in the pathogenesis of Hashimoto’s thyroiditis, an autoimmune disorder leading to chronic inflammation of the thyroid. In one study of 49 Hashimoto’s patients and 50 healthy individuals, those with Hashimoto’s were more likely to be deficient and selenium.[18]

Selenium is so important to the thyroid—and to the body overall—in part, because it is one of the building blocks for glutathione reductase, our most powerful endogenous antioxidant. Thus selenium is involved in quenching free radicals and plays an important role in our cellular defense against oxidative stress. In addition, selenium deficiency has been correlated with impaired cell-mediated immunity and impaired function of the immune system’s B-cells.[19]

Iodine is the central building block for our two thyroid hormones, thyroxine (T4) and triiodothyronine (T3), and iodine deficiency is the most common cause of hypothyroidism. Our bodies contain about 15 to 20 mg of iodine, 70%–80% of which is in the thyroid.[20] Because our bodies do not produce iodine, we need to get it either from our diet or supplements.

Iodine deficiency is widespread—over 1.5 billion people in 118 countries are thought to be at risk, including Africa, Asia, Latin America, and parts of Europe.[21] Vegans and vegetarians are also at risk. One study that examined the diets of 81 adults concluded that 25% of vegetarians and 80% of vegans suffer from iodine deficiency.[22]

As long ago as the 1600s BC, humans consumed iodine-rich seaweeds to treat goiter, though they did not know why the seaweeds helped.[23] Today, iodized salt can be found in most restaurants and home kitchens. Yet we may still be deficient if thyroid nodules are any indication. Autopsy studies show thyroid nodules in up to 60% of individuals, and thyroid imaging studies show a 50% prevalence of these nodules.[24]

Even when we get enough iodine in our diets, we may actually be functionally deficient in this nutrient. Iodine is one of a family of chemicals called halides, which includes fluorine, chlorine, and bromine. These are in wide use today in everything from fluorinated water to flame retardants. These other halides compete with and displace iodine in the body.[25] A 2010 study of almost 4,000 healthy adults found that those with high blood levels of two man-made fluorine-based chemicals (called perfluorooctanoic acid or PFOA, and perfluorooctane sulfonate or PFOS) were twice as likely to have thyroid problems as those with the lowest levels.[26]

Not surprisingly, iodine deficiency and anxiety are linked. In the study that looked at 102 patients with nodular goiter, anxiety was significantly higher in those with lower levels of iodine, as measured in a urine test. In fact, the researchers concluded that mineral deficiencies on their own were linked to anxiety (iodine) and to both anxiety and depression (selenium) and that supplementation could be useful simply to help prevent these mood disorders.[18]