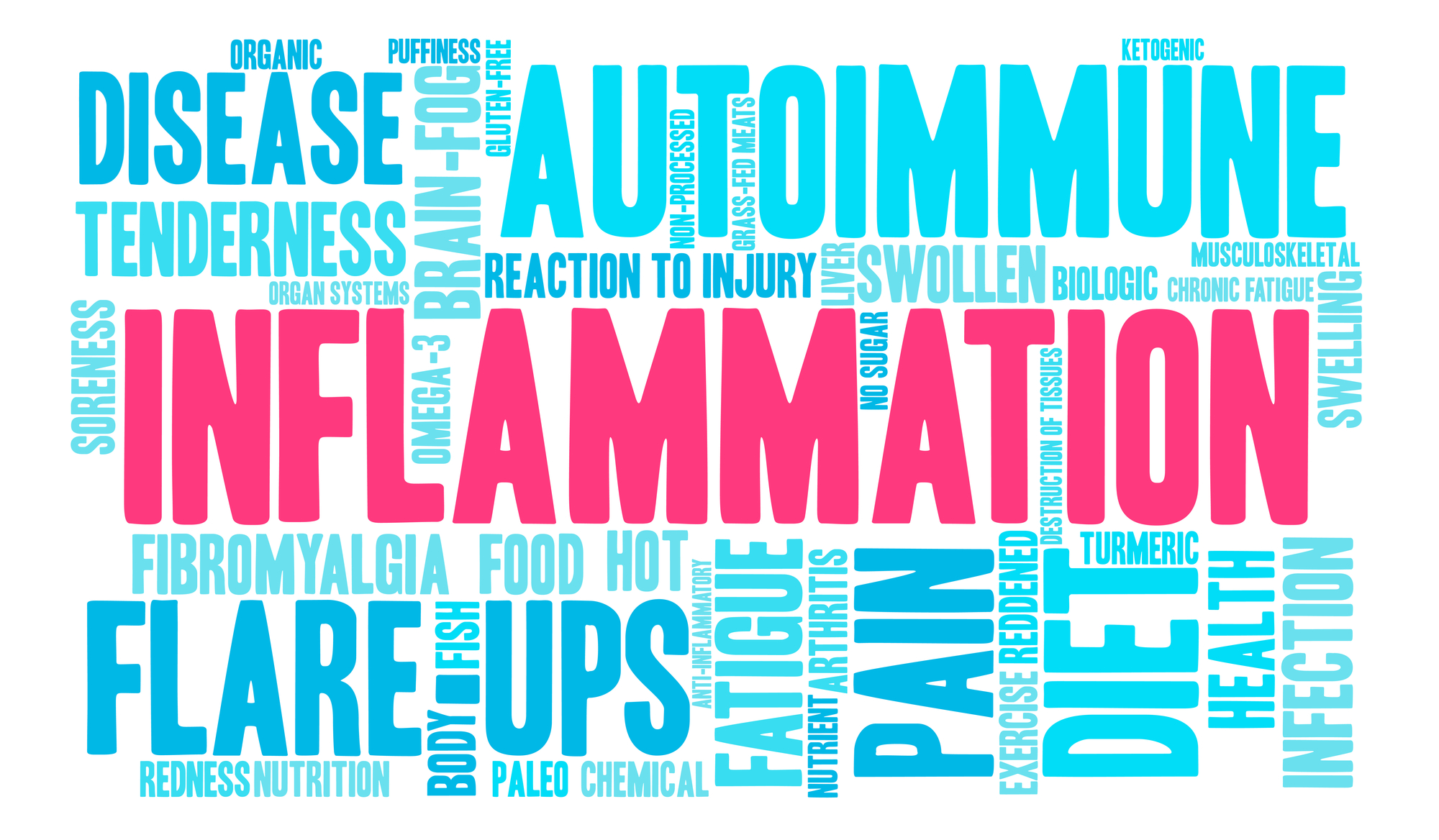 From your first breath to your last, your body is working hard to keep you healthy. Unfortunately, people do a lot to sabotage themselves and then feel sick, tired and just generally crummy.

Diseases that used to be thought of as completely unrelated, we now know have at least one thing in common: chronic inflammation. Chronic inflammation damages cells, weakens tissue and makes you age faster, a process called “inflammageing.”

Inflammation is the most common link that underlies many diseases. “Inflammatory diseases” include atherosclerosis (hardening of the arteries), dementia, arthritis, vasculitis, diabetes, osteoporosis and autoimmune disease. In fact, the suffix “-itis” means inflammation. These also include dermatitis, colitis, uveitis, prostatitis and any disease that have “-itis” in its name. Taken as a whole, inflammatory diseases are the number one cause of disability and death.

Here are some sobering stats:

Osteoporosis: Osteoporosis is the most common bone disease in the world, affecting more than 200 million people, including 53 million in the United States. It’s so common that every 30 seconds someone in the world with osteoporosis breaks a bone.

In fact, if you’re a woman your risk for breaking a bone because of osteoporosis is equal to your combined risk for breast, uterine and ovarian cancer. And if you’re 50 years old or older, your risk of dying from a hip fracture is similar to your risk of dying from breast cancer. Osteoporosis is responsible for more days spent in a hospital than diabetes, heart attacks and breast cancer. In my book, Fracture-Proof Your Bones: A Comprehensive Guide to Osteoporosis, I review these data, help you identify and eliminate hidden bone destroyers and walk you through the process of creating a holistic program to support your bone health and reduce your fracture risk.

Diabetes: According to American Diabetes Association, 30.3 million people or 9.4% of the American population, had diabetes in 2015 and it was the 7th leading cause of death in the US.

Cardiovascular diseases: Cardiovascular diseases (CVDs) accounts for 1 out of every three deaths or approximately 800,000 deaths in the United States. Said another way, if you get together with two of your friends, the grim facts are that one of you will likely die of heart disease. Fortunately, there are things you can do to tip the scale in your favor. Consuming more foods that combat inflammation is an easy one.

Arthritis and Joint Diseases: These affect approximately 350 million people worldwide and nearly 43 million people in the United States or almost 20% of the population. There are more than 100 types of arthritides (yes, that’s the plural of arthritis), with osteoarthritis being the most common. Supporting healthy inflammation balance is an important strategy when working to improve joint health.

Allergies: These rank among the sixth leading cause of chronic human diseases in the United States and affect more than 50 million Americans each year. Asthma affects more than 24 million people in the United States including more than 6 million children. In 2015, 8.2% of adults and 8.4% of children were diagnosed with hay fever.

Chronic Obstructive Pulmonary Disease (COPD): The third most common cause of death in the United States in 2014, and nearly 15.7 million Americans (6.4%) were reported to have been diagnosed with COPD.

Overweight and Obesity: Overweight (defined as body mass index [BMI] of 25–29.9) and obesity (BMI ≥ 30) are epidemic, with 65% of adults classified as overweight or obese. Nearly one-third of children are either at risk for being overweight or are themselves overweight or obese. Obesity alone contributes to more than 280,000 deaths each year in the United States,  and in the coming decades may erode the national gains in life expectancy.

While you can’t control which genes your parents gave you, you can totally control what you put in your mouth. Making the right food choices can provide antioxidants and other nutrients to reduce inflammation, reduce your risk and improve how you look and feel. As an aside, despite the common belief in the supremacy of your genes, your genes are not your destiny. What you eat day aftr day is more important than your genetics.

Crappy diets cause inflammation and disease, but when you eat the right foods, inflammation improves and along with it, the risk for some of the most common and dangerous diseases. Most people eat a Standard American Diet (SAD). This is radically different from our ancestors’ diets and how our body’s evolved.

The most common foods consumed in the SAD are grain (eg, corn) fed beef, processed meat, eggs, French fries, high-fat dairy products, refined grains, sweets, and desserts. All of these are acidic foods that can promote inflammatory. Their consumption should be minimized.

Below are some of my top alkaline foods that are chock full of healthy nutrients and are powerfully anti-inflammatory.

Avocados are an excellent source of fat. One cup (about 1 small/medium avocado) provides 20-25 grams of fat. Fat has gotten lots of bad press, but healthy fat is good for you and our bodies require it. The polyunsaturated fat in fish and the monounsaturated fat in avocado are two types of healthy fats.

Fat increases the absorption of fat-soluble nutrients, such as vitamin A, vitamin E, vitamin D, vitamin K and phytonutrients such as carotenoids, which are powerfully anti-inflammatory. Avocado also contains phytosterols including beta-sitosterol, campesterol, and stigmasterol. These nutrients also combat inflammation. Including one avocado per day into a person’s diet has been shown to lower risk of heart disease, cholesterol, and decrease oxidative stress. Sliced avocado with some salt and extra virgin olive oil drizzled over the top is delicious, and avocado can also be added to your morning smoothie recipe.

Given the high concentrations of bioactive compounds in cherries, it’s not surprising that cherries promote health. Results from published animal and human studies suggest that consumption of cherries may reduce the risk of several chronic inflammatory diseases including, arthritis, cardiovascular disease (CVD), diabetes, and cancer.

Additional evidence suggests that cherry consumption may improve sleep, brain health, and recovery from pain after strenuous exercise. Like all foods, cherries’ health benefits and phytochemicals work synergistically. The anti-inflammatory effects of cherries are the result of polyphenols, melatonin, carotenoids and vitamins E and C.

Fish are a rich source of omega-3 fatty acids. These important fats combat anti-inflammatory. A study found that those people who ate fish two times or more each week had a nearly 50% decrease in the inflammatory chemical C-reactive protein (CRP) compared to people who ate fish less than once a month. In their study they also found that consuming fish oil dietary supplements was also associated with a lower CRP.

Garlic is an ancient food that originated in Asia. Today about 80% of world’s garlic is cultivated in China. Garlic has a rich history as a spice in foods and in medicine. In traditional medicine, garlic is used to treat conditions of the digestive system and respiratory system, as well as the flu. Garlic is an essential component of my Quick and Easy Cold and Flu Killer broth.

More than 200 chemicals with diverse properties have been found in garlic extracts. Sulfur compounds in garlic are what give it its characteristic flavor and are also powerful antioxidants and anti-inflammatory.

Olive oil is a staple in the Mediterranean diet. Olive is high in polyunsaturated fat and polyphenols. Of the different types of olive oil, extra virgin olive oil (EVOO) has the highest concentration of helpful polyphenols and should be the one you buy.

A 2017 review article in the journal Nutrients, evaluated the health benefits of consuming EVOO as part of an overall healthy dietary pattern, such as the Mediterranean diet. The researchers concluded that EVOO can help reduce inflammation, and reduces the risk for diabetes mellitus, heart disease and obesity.

To preserve its health benefits, it’s best to consume EVOO at room temperature. You can sauté with it, but olive oil is not a high-heat oil. It goes rancid if it gets too hot. When olive oil gets to about 410 degrees Fahrenheit, it reaches its “smoke point” and you’ll see smoke start coming from the pan. When that happens with an oil, the oil is going bad and creating harmful free radicals. Try putting room-temperature olive oil on salads, or only using it to cook using low heat.

Pineapples (Ananas comosus) contain bromelain, which helps reduce inflammation. Bromelain has been clinically evaluated for its use as an anti-inflammatory agent for inflammation of the colon, chronic pain, rheumatoid arthritis (RA), soft tissue injuries, and asthma.

In addition to bromelain, pineapple is also high in vitamin C; manganese; copper; B vitamins such as vitamin B1, B5, B6 and folate; and fiber. Many of these nutrients, including vitamin C, manganese and B vitamins are used by the body as antioxidants and to promote healthy levels of inflammation.

Eating pineapple can provide all of these healthy nutrients, but the clinical trials looking at the health benefits of bromelain are so overwhelmingly positive that I included it in my Joint Relief formula to promote joint health, movement, physical function and healthy inflammation balance.

A regulator of inflammation, turmeric works in two main ways: it suppresses an enzyme called cyclooxygenase (COX) that creates proinflammatory signals in the body, and it inhibits nuclear factor kappa beta (NF-kB), a gene that enhances production of proinflammatory molecules. The ability of the antioxidants in turmeric to decrease free radicals is similar to that in vitamins C and E. Since the antioxidant activities of turmeric are not degraded by heat (unlike most vitamins), even using the spice in cooking provides benefits. The research on turmeric is so convincing that I included turmeric standardized extract in my Supreme Multivitamin, Brain Blend and Joint Relief formulas.

The bottom line is that consuming healthy fats and more fruits and vegetables can reduce inflammation and your risk for the most common causes of disability and death. And if you can do that with food, providing your body the nutrients it needs to thrive, you’re going to feel better, enjoy your life more and save a ton of money on doctors you don’t want to have to see anyway.

The Cholesterol Mistake Everyone is Making