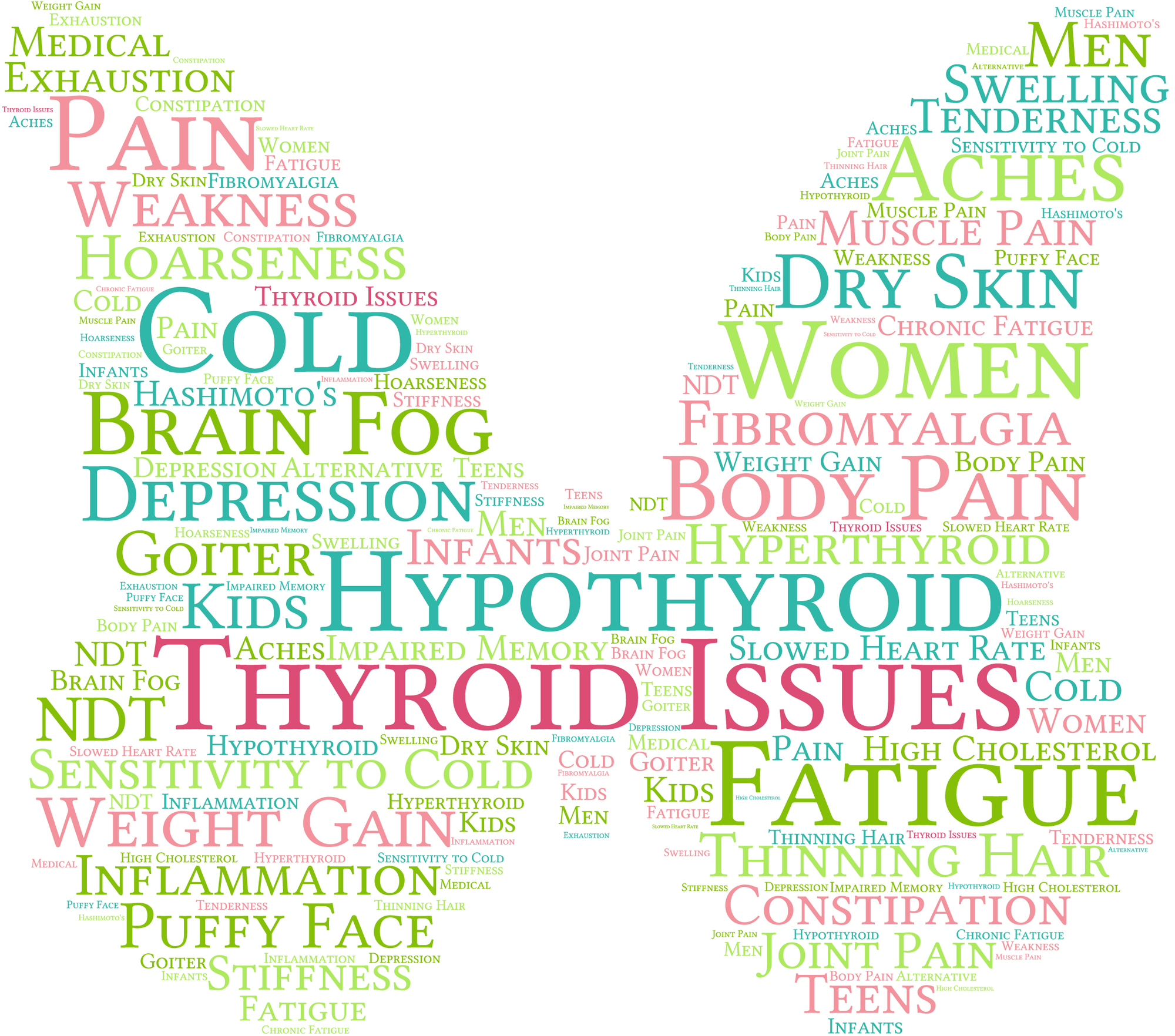 The thyroid is a butterfly-shaped gland at the base of the neck that produces two hormones, levothyroxine (T4) and triiodo-thyronine (T3). About 80% of thyroid hormones produced is T4 and about 20% is T3. T4 is inactive and is converted in tissues throughout the body into the active T3 hormone.

These chemical messengers regulate metabolism in every cell in the body, effecting your bones, blood, digestion, mood, memory, hair and energy.1 The production and release of T4 and T3 is controlled by thyroid-stimulating hormone (TSH), which comes from the pituitary gland in the brain.2

When the thyroid produces fewer hormones than your body needs, it’s called hypothyroidism.3 Due to the gland’s full-body link, poor thyroid health creates a ripple effect that impacts the entire body.4

According to the American Academy of Family Physicians, roughly one in every 300 adults has hypothyroidism and as much as 20% of women over 60 years old suffer from low thyroid function.5,6 While we don’t know definitively why, hypothyroidism affects far more women than men.

Since thyroid hormones affect every cell in the body and symptoms of low thyroid mimic other conditions, hypothyroid can often go unrecognized and be confused for other issues. Hypothyroid often develops slowly, so it often takes people months or even years to notice the symptoms. Low thyroid can cause fatigue, weight gain, a puffy face, cold intolerance, joint and muscle pain, constipation, dry skin, dry, thinning hair, depression and decreased heart rate.7 Hypothyroid can also elevate cholesterol, which may increase heart disease and stroke risk.8

And as if that weren’t enough, other symptoms include memory loss, constipation, infertility, brain fog, muscle weakness, poor circulation, lightheadedness, visual disturbances, difficulty processing information and decreased motivation. Making thyroid disorders even trickier to identify, symptoms can vary with age. For example, older adults may notice a decrease in cognitive function as the only symptom.

While radiation therapy around the head or neck and certain autoimmune diseases can cause low thyroid,9 a diet deficient in nutrients crucial for thyroid health is a common culprit. Selenium, iodine, iron, niacin, zinc and vitamin E are all required for healthy thyroid function; however, the American diet is consistently deficient in vitamins and minerals.10 Processed foods, including white rice, pasta, potato chips, and baked goods that use white flour contain almost no vitamins and minerals.11,12 That’s largely due to the fact that about 76% of iron, 16% of selenium and 78% of zinc is lost during the refining process that turns whole wheat into white flour for such products as breads, muffins, cookies and pizza dough.13,14

A recent Centers for Disease Control and Prevention Nutrition Report found that 10% of Americans are nutrient deficient, with iron being the second most common nutrient missing from Americans’ diets.15 While taking an iron dietary supplement can help restore healthy levels of iron and oxygen-carrying red blood cells, consuming the essential mineral through iron-rich foods is important. According to the U.S. National Institutes of Health (NIH) Office of Dietary Supplements, iron has relatively low bioavailability, so choosing foods with the right type of iron is key to maintaining healthy iron levels.16

Age and biological sex determine how much iron a person needs. Most notably, due to iron losses through menstrual blood, women of reproductive age need significantly more iron (18mg/day) than men (8mg/day).17 As a result, iron deficiency is more common among women than men.

Iron deficiency is the most common cause of anemia, a condition in which a lack of red blood cells or hemoglobin causes extreme fatigue. Iron-deficiency anemia accounts for at least 50% of all cases of anemia globally.18 Anemic people don’t get enough oxygen delivered to brain and muscle tissues and as a result, an estimated 1.62 billion people worldwide suffer from fatigue, shortness of breath, rapid heart rate, dizziness, depression, decreased cognitive function, and feeling cold as a result.19

Anemia is also often the first signs of hypothyroidism. That’s because the thyroid needs iron to produce adequate amounts of T3 and T4. A 2012 study published in Endocrine Journal found that as many as 43% of people with hypothyroidism and 39% with subclinical hypothyroid were anemic, as opposed to 26% in the general population.20

Healthcare providers can order a simple, routine blood test to determine whether or not a patient needs more iron. The complete blood count (CBC) screens for anemia by testing blood for white and red blood cells as well as hemoglobin, a protein in red blood cells that delivers oxygen from the lungs to the rest of the body. However, it’s important to understand that you can have iron deficiency, and the symptoms of iron deficiency, without it showing up on a CBC test. The most sensitive indicator of iron status is a serum ferritin test. For more information, read my blog, The Most Important Lab Test Women Aren’t Getting.

Iodine is found in every tissue in the body and is required for the thyroid gland to produce thyroid hormone. A 2018 review of National Health and Nutrition Examination Survey data found U.S. dietary iodine intake has drastically decreased since 1974, halving in the past three decades.21,22

Today, urinary iodine concentrations among women of reproductive age in the U.S. is below World Health Organization recommendations.23 Alarmingly, a 2017 study published in Toxicology and Applied Pharmacology estimated that 21-44% of American women in their third trimester of pregnancy had inadequate iodine.24

This is particularly important because the hormones released by the thyroid are required for normal neurological developing during pregnancy and early childhood and even a mild iodine deficiency can impair cognitive function.25,26 But iodine also plays a role in breast health. Iodine deficiency is associated with fibrocystic breast disease (fibrous, dense, painful breast tissue), which can be effectively reversed or prevented with iodine supplementation.27 At least 50% of women of child-bearing age have fibrocystic breast disease, which is associated with an increased risk for developing breast cancer.28

The U.S. NIH recommends that adults over the age of 19 as well as pregnant women should consume 1,100 mcg of iodine every day.29 Eating iodine-rich foods is the best way to maintain healthy levels of the nutrient. Seaweed is the richest source of iodine because it grows in iodine-rich seawater, and seafood is typically high in iodine for the same reason.30 Dairy products are also often rich in iodine across the board; however, there are compelling health reasons to remove dairy from your diet. The amount of iodine in fruits and vegetables varies widely, depending on the iodine content of the soil in which the food was grown.

More than 70 countries, including the U.S., have iodized salt programs. Iodized table salt was introduced in the U.S. in the 1920s and historically was an effective way to combat iodine deficiency in the country. However, though it’s very common among manufacturers, fortifying table salt with iodine is voluntary in the U.S., and table salt accounts for just a small percentage of salt intake nationwide. It’s estimated that about 70% of the table salt in the U.S. is iodized, but table salt accounts for just 15% of average total daily salt intake.31 For this reason, and other health reasons, people should not rely on fortified salt to meet their daily iodine needs.

Selenium is a mineral with many biological functions. Not only is it crucial for the thyroid gland, but it has important roles in the body’s antioxidant systems. In adults, the thyroid has a higher amount of selenium per gram of tissue than any other organ and it’s involved in producing thyroid hormones and converting T4 to T3 throughout the body.32

Protein-rich foods including dairy products, nuts, cereals, seafood, and meat typically contain the most selenium, while protein-poor vegetables typically do not contain much selenium. Sea salt, eggs, yeast, bread, mushrooms, giblets, garlic, asparagus, and kohlrabi are all great sources of this mineral. Like iodine, the selenium content in food varies depending on the amount of selenium in the soil in which it was grown.33

The NIH Office of Dietary Supplements recommends that people over the age of 14 should consume 55 mcg of selenium daily and pregnant women consume 60 mcg and 70 mcg per day while breastfeeding.36

There is a bit of a symbiotic relationship that exists between zinc and thyroid hormones. Zinc is required to convert T4 into T3 and the absorption of zinc by the intestines needs thyroid hormone. Therefore, low zinc and cause hypothyroidism and hypothyroidism can in turn contribute to a zinc deficiency.37 A 2010 study showed that increasing zinc intake significantly improved T3 production in humans.38

Zinc deficiency is rare in the US but is quite common in low- and middle-income countries in Africa, Latin America, Asia and the Caribbean, where an estimated 2 billion people are zinc deficient.39

Adult males require slightly more zinc (11 mg) than females (8mg), and pregnant women should consume between 11 mg and 12 mg of zinc daily.40 While red meat and poultry provide the lion’s share of zinc consumed in the American diet, oysters contain more zinc per serving than any other food––more than 10 times more per serving than beef.41 Beans, nuts, crab, lobster, and dairy products are also good sources of the mineral.

Although diet is the first place a person from which a person’s nutrition should come, when more is required than what people can consistently get from their diets, dietary supplements can provide extra nutrients to promote your health.

Top Reasons to Test Your Thyroid

When it Comes to Dietary Supplements, it’s Buyer Beware

1 How does the thyroid gland work?. Institute for Quality and Efficiency in Health Care (IQWiG). 2018 April 19. [Article]

3 How does the thyroid gland work?. Institute for Quality and Efficiency in Health Care (IQWiG). 2018 April 19. [Article]

26 Perrine, Cria G. and Kirsten Herrick and Mary K. Serdula and Kevin M. Sullivan. Some Subgroups of Reproductive Age Women in the United States May Be at Risk for Iodine Deficiency. The Journal of Nutrition, Volume 140, Issue 8, August 2010, Pages 1489–1494. [Article] 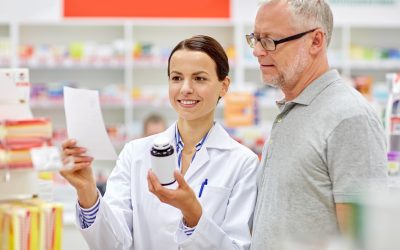